A Toronto bakery recently whipped up a $900 cupcake for a customer who wanted to buy “something special” for his wife’s 40th birthday. It’s now offering the extravagant confection to the public. 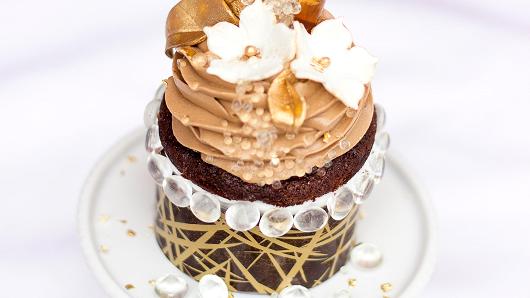 Created by Le Dolci bakery, the cupcake is made from an exotic list of curated ingredients—sea salt from Camargue, France, honey from Rosewood Estates Winery in Ontario, butter from Normandy, France—and is topped with 24-karat gold flakes, an edible gold-painted branch and confectionary bubbles made with a “molecular gastronomy” technique.

Sanguedolce and her team of bakers worked with the customer for weeks to find ingredients from places the couple had visited, including Italy, Hawaii and France, as well as things they liked, such as Krug Champagne.

“When his wife saw it, she shrieked—the equivalent of someone unwrapping a pair of Louboutins,” she said. “They ate it and said it was delicious.”

Le Dolci received a flurry of inquiries and interest about the cupcake, which has helped sales of the bakery’s everyday $2.75 cupcakes. But so far, there have been no other orders for the $900 version.

Although the cupcake costs more than a month’s rent for many, Sanguedolce said people who make their money through hard work are free to spend as they please.

“This customer also gives millions to charity,” she said, declining to disclose his identity. “There’s [a] lot of money in this world and people who can afford luxury. There’s nothing wrong with having a little bit of fun and theater in your life.”

In that spirit, here’s the full list of ingredients for Le Dolci’s $900, bite-size masterpiece: