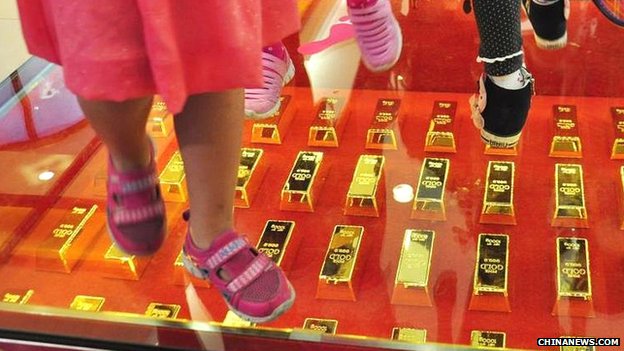 The streets have been paved with gold at a shopping centre in China where a walkway has been built using real 24-carat bars.

The walk at the indoor precinct in Yichang, in Hubei province, consists of 606 shiny yellow bricks, worth $32m (£20m) in total, the Chinanews.com website reports. The bricks weigh 1kg (2.2lb) each, and are covered with a glass pane. The lavish attraction was created to celebrate the shopping centre’s 18th anniversary – and to attract customers during the upcoming “Golden Week” national holiday, after which it’ll be dismantled. Shoppers have been eager to use the walkway, as it’s apparently believed in China that walking on gold brings luck, according to the Shanghaiist blog.

Golden Week starts on 1 October – the day the People’s Republic of China was founded in 1949 – and lasts until 7 October. It’s a popular time for Chinese people to travel, usually to visit relatives in other parts of the country.