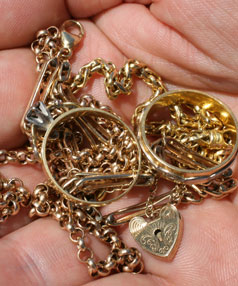 All that glitters: Mall gold buyers have been criticised for low prices

All that glitters: Mall gold buyers have been criticised for low pricesKIOSKS HAVE sprung up in shopping malls all over the country offering to buy your unwanted gold as US dollar prices soar, but they may not always offer the best deal for those tempted to sell.

GoldBuyers New Zealand, a Kiwi company part-owned by Aussie firm GoldBuyers, has opened kiosks in 14 malls throughout the country with a further five about to open, and is seeking to take advantage of a big spike in the gold price which is tempting many people to cash up their old gold.

Gold prices have spiked to $US1112 ($1587) a troy ounce from around $US850 ($1545) a year ago as speculators and investors have sold up shares and other assets to buy gold, which has the reputation as a safe haven in periods of financial crisis.

That has suddenly made it appear a valuable commodity and enabled gold buyers to offer more attractive prices for unwanted family jewellery.

But those selling their gold need to realise the cost of recycling their gold, and the margin the gold-buyer takes, means they are likely to get less than half the value of the gold content of their unwanted bracelets, rings, earrings and necklaces.

And, judging by a mystery shop by the Sunday Star-Times, the mall is one of the worst places to go to sell gold.

The first most Kiwis will hear of GoldBuyers New Zealand is when a salesperson in a mall accosts them and presses a faux $50 note into their hand as they walk by.

There are no buyer’s rates advertised, but the psychology of the faux $50 is clear: there’s quick money, and good money, to be made from selling your gold here.

It’s a message repeated on the firm’s website, which says the firm is committed to “excellence in service and value” and that “due to the price of gold today, in many cases people often receive more for their pieces than the original purchase price”.

Better still, the mall kiosks are a million miles from the pawnbrokers and secondhand dealers who have specialised in buying up unwanted gold – places many have little desire to enter.

In many cases, however, it seems pawnbrokers offer better prices.

GoldBuyers is, in effect, sanitising gold buying and bringing it into the middle class sphere, and its website shows the firm is seeking to find reps to hold goldbuying parties in their homes in return for a slice of the profits.

A consultation with the 20-something green-haired youth manning the kiosk in Westfield’s St Lukes mall was quick.

The salesman looked at the hallmarks and separated the items by carat rating – in our case, two 18-carat rings (one with a small cluster of five diamonds), an 18-carat chain and two 9-carat wrist-chains.

He checked to see if they were magnetised, then weighed them.

Within four minutes, we had a quote – $360. But the salesman said that before any money changed hands, he’d also have to make a cut in each of the items and then apply acid to them from one of a number of small, brown glass bottles he had on the counter. If the acid bubbled or turned pink, or one of several other colours, he wouldn’t buy the jewellery.

We would be paid the “gold weight” of the diamonds, he said, as a bonus, or the stones could just be popped out and he’d buy what was left. GoldBuyers had a box of unwanted gemstones which it had little use for and were hard to resell, the salesman said.

The sellers, the green-haired salesman told me, had a variety of motivations. One seller came with six single earrings, having lost one from each pair. Others were getting rid of “bad blood” jewellery given them by now-hated former boyfriends. Still others were disposing of damaged items, bent rings, twisted bracelets, broken chains.