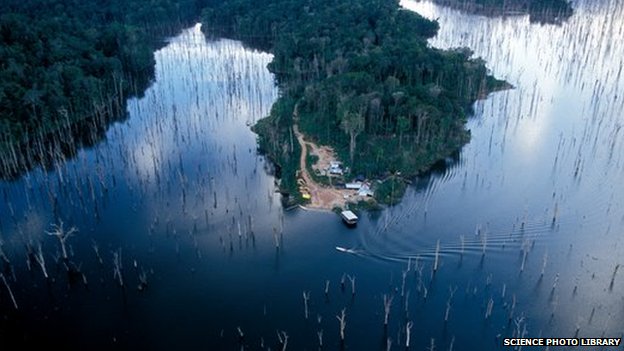 Global demand for gold is putting some of the most remote and pristine tropical forests at risk, scientists warn.

University of Puerto Rico researchers say gold mining has become a major threat to ancient rainforests in countries such as Peru and Suriname.

Consumers can help by buying only fair-trade gold, say environmentalists.

It was concentrated in four main areas – the Guianan forests; the Southwest Amazon in Peru; the Tapajos-Xingu forest in Brazil; and Magdalena Valley-Uraba in Colombia.

Overall, the amount of forest lost was less than 1% but much of it was located in or near conservation areas. This has made it profitable to mine in areas such as the soil beneath tropical forests.

The removal of vegetation and development of roads and railways can have long-term impacts, say the scientists.

Gold mining can also create pollutants such as mercury, which can enter rivers and the atmosphere.

Dr Susanne Schmitt of WWF called for better mining laws and awareness and training to reduce the impact of gold mining on forests and to improve local people’s livelihoods.

Consumers could also help when purchasing gold, she added.

“By insisting on fair trade gold when purchasing jewellery of other gold products consumers have real power in ensuring that this unfair and environmentally damaging practice ends, to be replaced with a longer term industry providing jobs and security to communities without destroying their environment.”