When asking someone what can be produced by using gold as the material, the most common answers would be jewellery, bullion, coins, it can be used for decoration, in some electronic devices, etc. How about food???

That’s right. The custom of eating gold began with the ancient Egyptians, who thought it would bring improvements in their health. They were right! Experts agree that the consumption of gold brings many benefits to our body, slows the aging of the skin and eliminates toxins, helps fight inflammation and arthritis and osteoarthritis, lowers levels of stress, improves concentration, memory, mood and sense of well-being.

The edible gold can be found in the form of powder, flakes, sheets or spray, but only the purest gold, 23K or 24K, can be ingested. The leaves are produced in vacuum chambers. In this post we will enjoy the world’s most expensive dessert. The so-called “Frozen Haute Chocolate” is made in the restaurant Serendipity in New York – United States, and costs no less than US$25.000. It takes 28 types of cocoa from 14 countries and five grams of edible gold with 23K. The same restaurant also offers the most expensive ice cream, the “Golden Opulence Sundae”, Tahitian vanilla flavor with various toppings and rare 23K gold leaf, all for only US$1.000. Chic, luxurious and powerful.

If you are not into sweets, how about seasoning your food with gold instead of salt? 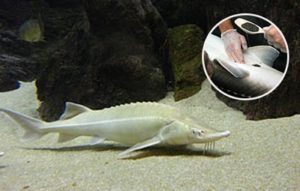 In the Caspian Sea, off the coast of Iran, there are three types of sturgeon, the fish whose roe caviar is made: the sevruga, osetra and the beluga. Of the three, the beluga sturgeon is the rarest animal – and it’s from the white beluga sturgeon, even rarer, that the ‘Soul’ comes, also known as the diamond of Persia. Only five pounds of it are produced each year and getting it is a laborious operation. The white beluga only produces roe from 25 years of age, when they reach 4 feet long and about 800 pounds. It has to be captured, not harmed. After that, it’s performed a kind of cesarean section in the animal and the roe (pearly white color) is removed with a small spoon. The fish is then returned to the seas. Only about 15 grams of Souls are produced for each operation. Orders should be made one year in advance and caviar comes at a very special packaging: a tin of 24 karat gold design from Maison Cartier.

If until now, everything that was said left you open-mouthed, know that the latest addition to the luxury market is the caviar with edible gold, mixed in 24 carat gold caviar. In Dubai there is gold everywhere, decoration, clothing and accessories, and hotels there are innovating serving gold in food, beverages and desserts.

Precious goodies, luxury that inspire, arouse curiosity and satisfy the desire are increasingly “popular” in the world.

Will this trend catch on here in New Zealand?