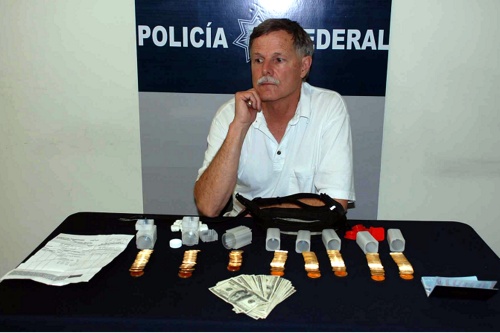 The Federal Police from the International Airport of Mexico City recently arrested a Mr Martin Thomas (U.S. Citizen), 58 years who had 150 gold coins in his possession. The gold has a total weight of approx 4.6 kilos.

According to the news report the gold coins were found in his baggage as he awaited a flight to Panama from the Mexico City airport, officials said. One container held 50 gold coins with the legend ‘Suid Afrika-South Africa’ on them and two others had 100 coins inside that said ‘United States of America’.

Although Mr Thomas provided a receipt that he had with him for the purchase of 50 of the gold coins worth $1,171 each, the gold was still confiscated by the prosecutors, the secretariat said. It is not clear what the charges are against him or even if it’s legal to confiscate gold coins in this manner.

Normally when passing through immigration one is required to declare ‘currency in their possession to X $ value’ and it would have been the legal face value on the coins – so $50USD/oz of gold. It seems bizarre to risk all that value  if he was legitimately importing/trading gold, so the theory is that either he was smuggling gold or the officials are corrupt and will keep the gold for themselves.

Either way, moving this much gold through Mexico – NOT SMART!