She usually favours skinny jeans and leather jackets for everday style, but Michelle Rodriguez has been experimenting with some more glam looks during Paris Fashion Week.

The Fast & Furious actress showed off her gym-honed body in the skimpy mini as she enjoyed another runway presentation. 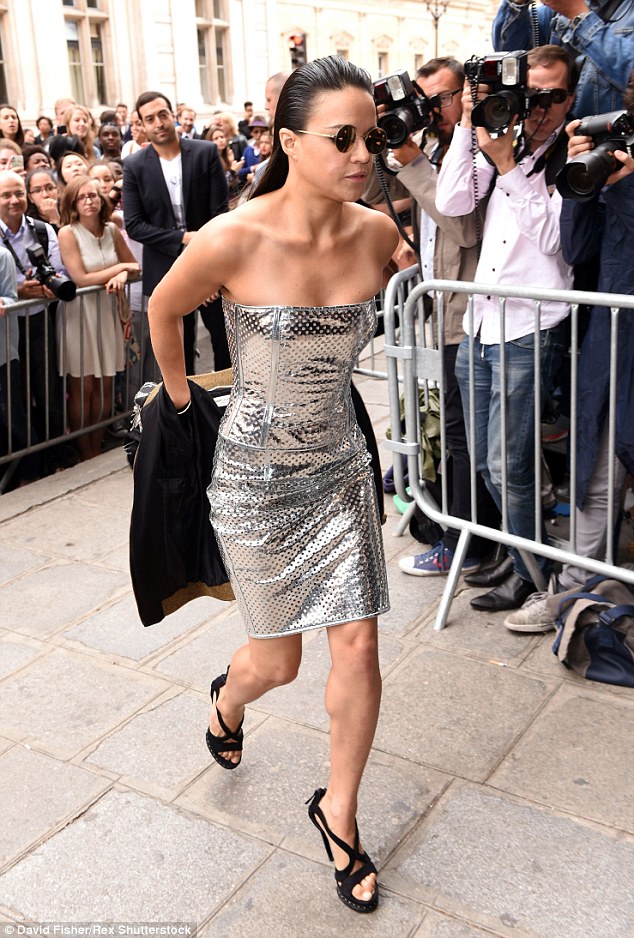 Michelle looked gorgeous in her metallic number, with the bodycon dress showing off her lithe figure.

The star added a pair of statement shoes to accentuate her legs, with the strappy sandals featuring a super high heel.

Looking like she was strutting the runway, Michelle slipped out of her jacket to reveal her glam dress as she headed past the cameras lined up outside the event.

Continuing the high fashion feel of her look, the actress slicked back her dark locks and added a pair of sunglasses.

It’s been a busy week of party-hopping and runway-watching for Michelle, with the star joining the A-list at Lancome’s 80th anniversary party on Tuesday evening after checking out Versace’s show, which kicked off Haute Couture week in Paris, on Sunday.

Speaking to the Hollywood Reporter at Versace, Michelle confessed that she’s a new convert to fashion week, since attending her first show last season:

‘I’m loving this. I’m curious about the closets and the designers and the art,’ she gushed.

‘I came with a lot of energy,’ she said, after explaining she’s had a few weeks off back home in Los Angeles. ‘Watch out.’