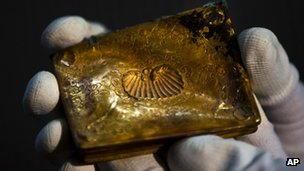 Spanish authorities have revealed some of the treasures from a ship that sank more than 200 years ago.

The Nuestra Senora de las Mercedes galleon sank off Portugal’s coast near the straits of Gibraltar in 1804 with more than 500,000 silver coins.

Spain won a five-year legal dispute to claim ownership for the treasures found by a US firm.

A block of encrusted silver coins stuck together after centuries under water, two gold tobacco boxes and a bronze pulley were among some of the items shown.

After it has been fully catalogued – a process that began when the treasure arrived from Florida in February – the silver treasure will be put on display in Spain’s museum of underwater archaeology in Cartagena.

The metals were mined and the coins minted in the Andes, from places that are now in Bolivia, Chile and Peru.

Spanish officials say that they never intend to sell the treasure.

“How would you put a price on the Mona Lisa?”

Obtaining the ship’s haul was the culmination of a long legal fight.

The company has said in statements that it had spent $2.6m salvaging, transporting, storing and conserving the treasure.