Whenever anyone envisions a huge bank robbery these days, they inevitably think of sophisticated criminals who use the latest technology in order to break into bank vaults of the highest security. No doubt these thoughts come from Hollywood movies like Die Hard and Oceans 11 (and 12, and 13).

Truth be told however, some of the biggest gold robberies in history were pulled off long before laser guarded banks, computer encrypted vaults and so forth were ever invented. Most were done with very low tech tools and methods, actually.

One example occurred in November 26, 1983, when 6 daring robbers broke into the Brinks MAT warehouse located at London’s Heathrow Airport.  The gang was easily able to enter the warehouse because they got “inside help” from security guard Anthony Black, and they quickly made their way to what they thought was £3 million British Pounds in cash. Once inside however they were completely surprised by what they found; three tons of gold as well as a large amount of cash and diamonds. Total worth; nearly £26 million pounds or $43 million American dollars. 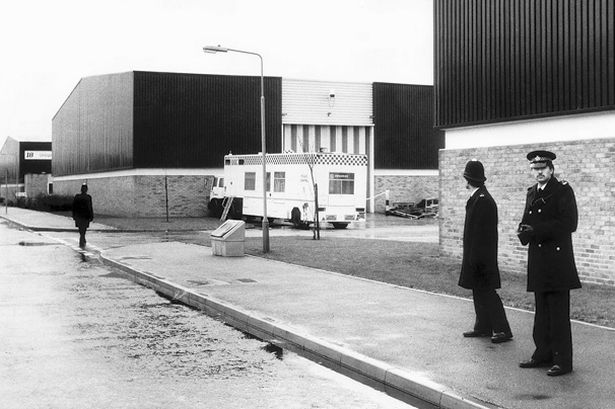 It was at the time, and it is to this day, the biggest gold robbery in history and was appropriately called “the crime of the century”.  With Black’s help the thieves were able to disarm a number of electronic systems that were in place at the time, allowing them to get into the bank vault that ended up holding 6800 gold bars in 76 separate cases. £100.000 worth of diamonds destined for the Far East was also found, both cut and uncut.

Since the robbers had expected to encounter only cash, which would have been much easier to carry and transport away, they were highly unprepared to get out of the warehouse with such an extremely heavy amount of gold. What was supposed to be a quick “in and out” job ended up taking them nearly 2 hours as they used a forklift in the warehouse to load the gold into a getaway van that one of the gang members had to actually go out and commandeer.

In a rather macabre twist, they poured gasoline (or petrol, as they call it in the UK) over a number of the staff members who they encountered inside the warehouse, threatening them with a lit match in order to get some of the information that they needed to break into the vault.

Another problem that they encountered once they made their getaway was simply that selling such a large amount of gold was not an easy task. In fact, it turned into a major headache and forced the gang to seek the help of an underworld figure known as “The Fox”, who happened to have underworld connections and was able to help them smelt down the gold and sell it. This was done with the assistance of one of London’s most notorious crime syndicates, the aptly named Adams Family, and a jeweler named Solly Nahome.

Of the 26 tons of gold that was stolen it’s estimated that approximately 3 tons has never been recovered. What’s also interesting to note is that, on gold jewelry purchased in the UK still to this day, many people refer to it as “Brinks MAT Gold” because of the high likelihood that it was made from gold that was smelted down from the heist.

If you’re considering selling your solid gold jewelry, watches or other objects (and you’re sure that they weren’t part of the Brinks Mat job) (just kidding), here at Gold Smart you’ll find the best service and the fairest offers on solid gold in all of New Zealand. Don’t take our word for it either, Google our name and we’re sure that you’ll find plenty of positive feedback about Gold Smart everywhere you look. Once you do, call and we’ll give you an excellent offer on your solid gold.