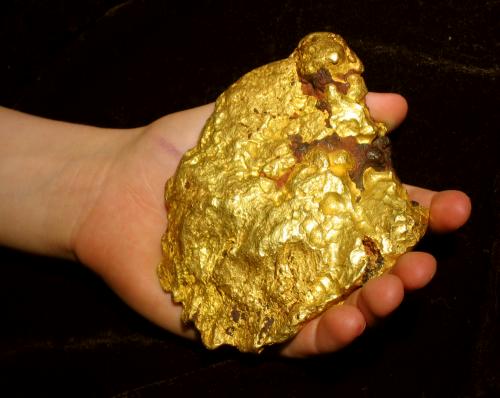 A gold nugget is a naturally occurring piece of native gold. Watercourses often concentrate nuggets and finer gold in placers. Nuggets are recovered by placer mining, but they are also found in residual deposits where the gold-bearing veins or lodes are weathered. Nuggets are also found in the tailings piles of previous mining operations, especially those left by gold mining dredges.

Nuggets are gold fragments weathered out of an original lode. They often show signs of abrasive polishing by stream action, and sometimes still contain inclusions of quartz or other lode matrix material. A 2007 study on Australian nuggets ruled out speculative theories of supergene formation via in-situ precipitation, cold welding of smaller particles, or bacterial concentration, since crystal structures of all of the nuggets examined proved they were originally formed at high temperature deep underground (i.e., they were of hypogene origin). Other precious metals such as platinum form nuggets in the same way.

Nuggets are usually 20K to 22K purity (83% to 92%). Gold nuggets in Australia often are 23K or slightly higher, while Alaskan nuggets are usually at the lower end of the spectrum. Purity can be roughly assessed by the nugget colour, the richer and deeper the orange-yellow the higher the gold content. Nuggets are also referred to by their fineness; for example “865 fine” means the nugget is 865 parts per thousand in gold. The common impurities are silver and copper. Nuggets high in silver content constitute the alloy electrum.

The largest gold nugget found was the Welcome Stranger, found at Moliagul, Victoria, Australia in 1869 by John Deason and Richard Oates. It weighed gross, over 2,520 troy ounces (78 kg) and returned over 2,284 troy ounces (71.0 kg) net.[5] It eclipsed the Welcome Nugget found eleven years earlier in Ballarat.

Historic large specimens include the crystalline “Fricot Nugget”, weighing 201 troy ounces (6.25 kg) — the largest one found during the California Gold Rush. It is on display at the California State Mining and Mineral Museum.

Gold nuggets are rare, even a small one can be worth double or more the current gold price.