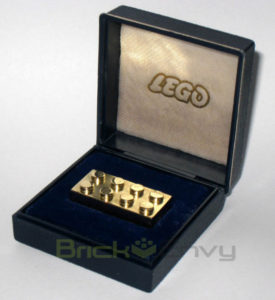 This is a solid gold 2×4 LEGO brick for sale. Apparently they were awarded to employees and business partners of the company back in the late 70’s and early 80’s.

This incredibly rare piece was given to LEGO employees that had 25 years of employement at the Hohenwestedt, Germany factory and was also given to couple of very special business partners of LEGO of the time. It was only given out from about 1979-1981, only one or 2 per year from my understanding.

This amazing brick comes in its original display box which features the LEGO logo of the time that it was given out.

Seeing how the piece isn’t even an ounce and an ounce of gold is currently worth around US$1,715, I guess you’re paying for the rarity/collector’s item-ness of the piece. Because if you just want a gold LEGO brick you could cast your own for way cheaper. Also, you seriously better have like, EVERYTHING else in the world first.