This precious metal came to life in the same fashion as all other chemical elements – nuclear fusion.

In the period of formation of the solar system, 15 billion years ago, the nuclei of hydrogen and helium atoms, the simplest elements, combined with high temperatures, gave rise to more complex elements, such as gold. On Earth, formed 4.5 billion years ago, the gold appeared in the form of atoms housed in the structure of other minerals – but the amount is very small. To have an idea, in the terrestrial crust – the outermost layer of the planet – in every billion atoms, only five atoms are gold. 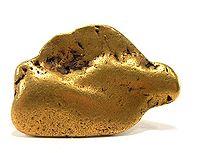 Gold nuggets (naturally occurring pieces of native gold) appeared millions of years ago, created by the action of geological processes that changed the face of the land surface, such as volcanoes and erosion.

Today gold can be found and extracted both from underground mines – up to 1.5 kilometres deep – to open mines – where the metal is removed only 50 metres from the surface – or even at a riverbed.

When a rock containing gold is found, it must be chemically treated to separate the mineral from other elements. In the fields, the concentration of gold is only a few grams per tonne extracted – No wonder that world production is small: about 2500 tons per year.

To find new gold deposits, geologists need an arsenal of information: First, satellite images show on the field geological faults or the presence of certain minerals and rocks that indicate the occurrence of a gold deposit. Then you need to make a geological mapping of the region, collecting rock samples, soil and sediment to examine areas which may have the metal.

If there is any certainty, it is time to drill the ground. Then, a good dose of luck also helps 🙂