Revered for its aesthetic and metallurgical properties for thousands of years, gold is still one of the most sought after precious metals. There’s no question gold has played an unique role for humanity, for better or for worse. Today, we’ll explore the fascinating science behind the origin of gold atoms and some theories that seek to explain how the prized element got to where it is today, here on Earth.

Why Gold is important

From what are now Israeli hills during the Copper Age to the Bulgarian Varna Necropolis in the 4th millennium, from the Egyptian pharaohs to the Spanish conquistadors, the allure of gold – its powerful effect on us – has been consistent and unmistakable. In fact, the Egyptians called gold “the breath of God”. And it’s not just the ancients that held gold to high esteem. To display his imperial glory, Napoleon gilded Paris in gold, while even more recently Hitler sought to control all of Europe’s gold as support for his “1000-year Reich.” What myths made gold such a prized commodity and what factual properties still support it as a precious metal to this very day?

First and foremost, what makes a precious metal is its rarity. Rarer than silver or copper, two other ores that have been mined since antiquity, its value was proportionately larger. Second, gold has fantastic properties like it does not tarnish, is very easy to work, can be drawn into wire, can be hammered into thin sheets, alloys with many other metals, can be melted and cast into highly detailed shapes, has a wonderful color and a brilliant luster. All of these properties could be harnessed since ancient times, as today, just by heating gold nuggets at high temperatures and using simple tools like hammers or molds. In short, gold is very memorable, so it shouldn’t come as a surprise that its main use is in jewelry.

Because gold is highly valued and in very limited supply it has long been used as a medium of exchange or money. The first known use of gold in transactions dates back over 6000 years. Early transactions were done using pieces of gold or pieces of silver. The rarity, usefulness and desirability of gold make it a substance of long term value. The first gold coins were minted under the order of King Croesus of Lydia (a region of present-day Turkey) in about 560 BC. Gold coins were commonly used in transactions up through the early 1900’s when paper currency became a more common form of exchange. The United States once used a “gold standard” and maintained a stockpile of gold to back every dollar in circulation. Under this gold standard, any person could present paper currency to the government and demand in exchange an equal value of gold. 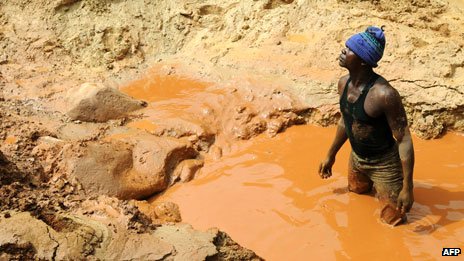 In places of the world, gold is still mined like it has been for thousands of years. Captioned is this miner in the Democratic Republic of Congo. Credit: AFP

Possibly gold’s greatest use to mankind didn’t became evident until early last century, when its fantastic electrical conductivity properties came to light. Solid state electronic devices use very low voltages and currents which are easily interrupted by corrosion or tarnish at the contact points. Gold is the highly efficient conductor that can carry these tiny currents and remain free of corrosion, which is why electronics made using gold are highly reliable. A small amount of gold is used in almost every sophisticated electronic device. This includes: cell phones, calculators, personal digital assistants, global positioning system units and other small electronic devices.

Where did gold come from?

We’re all made out of “star stuff”, and gold is no exception. Image: NASA

The ancient Aztecs believed gold was in fact “the sweat of the sun”. Though this isn’t literally true, the phrase is in fact a highly accurate metaphor. Gold, like most heavy metals, are forged inside stars through a process called nuclear fusion. In the beginning, following the Big Bang, only two elements were formed: hydrogen and helium. A few hundred million years after the Big Bang, the first stars were blazing away with their nuclear fires. These nuclear fires forced lighter elements together to make slightly heavier elements, and these nuclear reactions released a huge amount of energy. Gradually, these early stars began making elements such as carbon, nitrogen, oxygen — working their way up through the periodic table towards iron. But there was still no gold in the Universe. Once these earlier stars ran out of light elements to burn, they kicked in on the heavier ones. Finally, as they burnt silicon to make iron, they exploded as a supernova, and for a few short moments, each star would release as much energy as all the regular stars in that galaxy put together.In that cataclysmic explosion, for the first time, atoms of gold were manufactured — and then hurled out into the Universe, along with the other debris from that explosion.

On Earth, gold finally reached us some 200 million years after the formation of the planet when meteorites packed with gold and other metals bombarded its surface. During the formation of Earth, molten iron sank to its centre to make the core. This took with it the vast majority of the planet’s precious metals — such as gold and platinum. In fact, there are enough precious metals in the core to cover the entire surface of Earth with a four-metre thick layer. 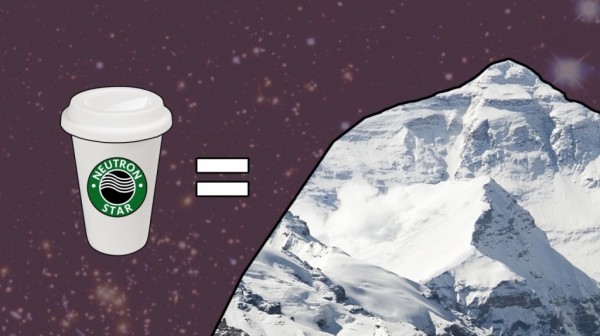 Another theory concerning the formation of gold that’s been gaining a lot of traction today is that the element can form following the collision of two neutron stars. Following the collapse of a massive star star – at least eight times more massive than the Sun – what remains is a extremely dense core. They have masses comparable to a star, but that mass is compressed into an object roughly 10 kilometers in diameter,or the size of a city on Earth. An other way to look at this would be to imagine cramming Mount Everest into your morning cup of coffee to achieve the same density as a neutron star. At these huge densities, the fabric and space and time is stretched by exotic physics.

Two neutron stars in mutual orbit can collide when gravitational waves carry enough energy away from the system to destabilize the orbit. When this happens, a type of gamma-ray burst can occur – these are the most powerful explosions in the universe. The intense energy would be enough to create gold and other heavy elements, according to a paper published in the Astrophysical Journal Letters.

Check out the video below for a brief explanation of the neutron star gold formation hypothesis.