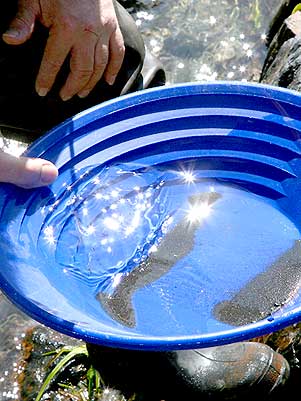 Gold panning is becoming more and more popular amongst geology enthusiasts in New Zealand and all over the world.  Also called simply panning, gold panning is a way to extract gold using, in most cases, few resources, low investment, simple equipment and rustic tools. The process is one of the simplest and also the oldest methods of mining gold.

The question is: can gold still be found using such an old technique? The quick answer: YES. It not only can be found but some people have become rich by doing so. 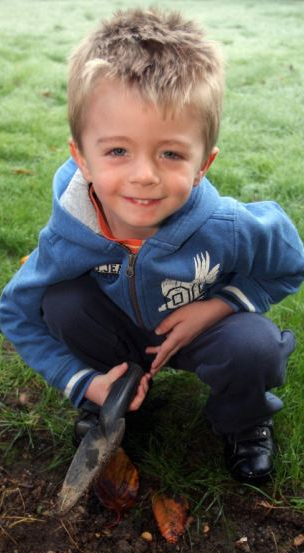 About a year ago, 3 year old James Hyatt used a metal detector for the first time in his life and BINGO: he found a gold pendant of the 16th century that was worth £2.5 million pounds (or NZ$4.7 million in today’s rate).

The boy was playing in a field with his grandfather’s metal detector when he found the “treasure”. “James got very excited when he realised he had found treasure, but he is still too young to understand the real meaning of the pendant” his father said to the Daily Mail. The boy also told how it happened: he was holding the detector when the device started to emit a sound, “beep, beep, beep.” “I was happy because we managed to find the treasure without a map equal to the pirates,” said James. The metal detector was even bigger than the child. James can be considered a lucky boy. For 15 years his grandfather tracked the soil of that region as a hobby without ever having found anything.

Why buy when you can pan your engagement ring? 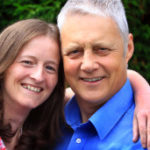 George MacIver, 53, returned to the hill where he and his fiancee, Tina Lear, met two years ago, to get the raw material for their engagement ring.

At the time they met, both panned gold in the same river during a group tour.

Three times a week for one year, MacIver trekked two hours to reach the site. In total, it took 156 trips until he got 6 grams of gold. After the melting process, the alliance weighted 4 grams.

Tina Lear, 31, said MacIver’s gesture “symbolises our relationship perfectly. We have similar interests and we became closer because of our passion for gold mining.” 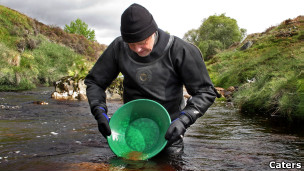 MacIver, who is a writer and photographer, said his effort of walking to the river – which was carrying a backpack of 30 kilograms in gold mining equipment – was worth it.

It’s not just a matter of putting the pan in the water and instantly finding gold nuggets. It takes a little research to find out where the gold flows down from the hills. It is usually located in riverbeds with few shoals or where the current decreases and causes swirls.

Many beginners get disappointed with their small results. However, many have found that their activity with the pan can be rewarding all by itself. Going out for a day on the river, hearing the birds and the bubbling water that pass between the rocks can be quite a relaxing experience.

Regardless of the amount you may find, give us a call and we will provide full assistance on selling your alluvial gold. As expert gold buyers, we at Gold Smart are always looking to assist our customers in the best possible way, with transparency and fair rates in every transaction.